Home  »  General   »   Top 15 Hairless and Creepy Looking Animals of Their Kind. And Wait Till You See How the Hairless Bear Looks Like in #10! 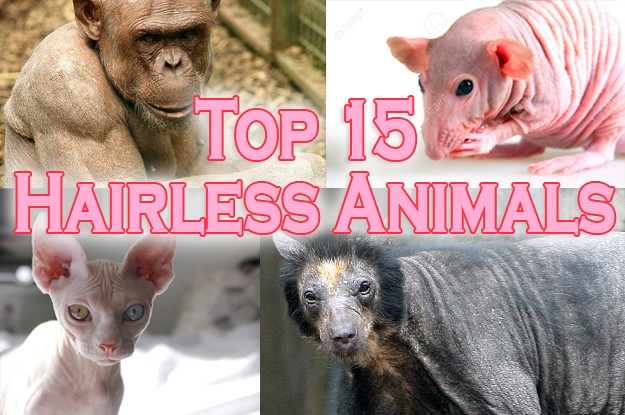 We know animals to be covered in either fur, scales or feathers. But there are also some that do not have hair on parts or their entire bodies. Nonetheless, these hairless animals are as beautiful and amazing as their hairy, furry and scaly friends. Hairless animals may be born that way, as what their genetic dictate, but some animals, just like us humans, become hairless due to several factors such as stress. Yes, animals can go bald due to stress, just like us who loss our hair when there’s a lot of stress going on in our lives.

Check out these hairless animals and see for yourself how different but still amazing they look, especially the hairless bear. We know bears to be big furry animals, so this hairless species is something to awe us. 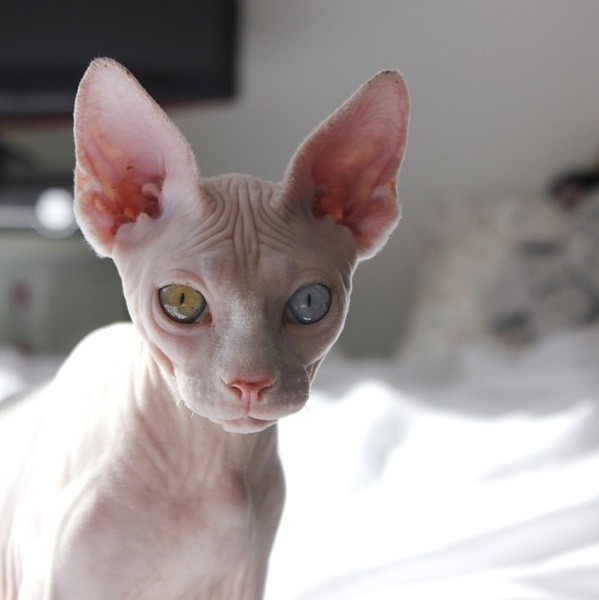 You may be freaked at first upon seeing a sphynx cat, because it virtually has no hair and its skin is wrinkled and shiny. The sphynx is not a natural breed of cat. It is a product of breeders. But just the same, the sphynx cat is energetic and affectionate. And the best thing about it? People with allergies can take care of this cat. Goodbye hairballs! 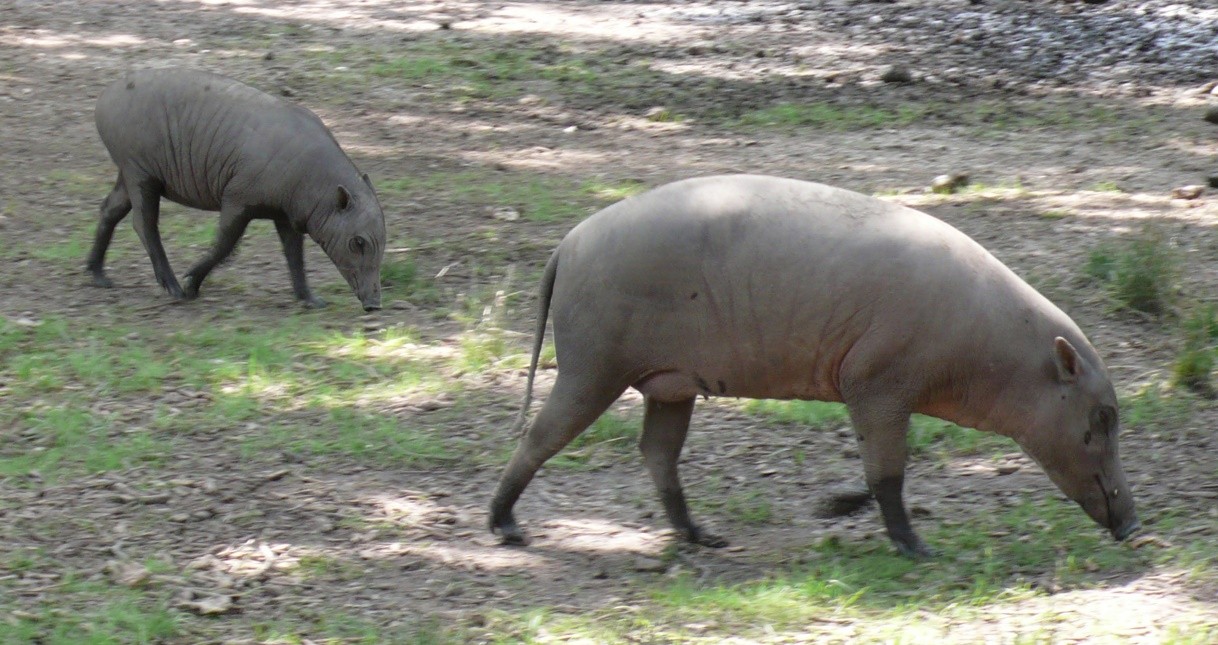 The Babirusa is a kind of pig found in Indonesia. It is black in color and its tusks are curved backwards, that when they are long enough might pierce their skin. The babirusa’s weird appearance has prompted Indonesians to fashion demonic masks inspired by it. 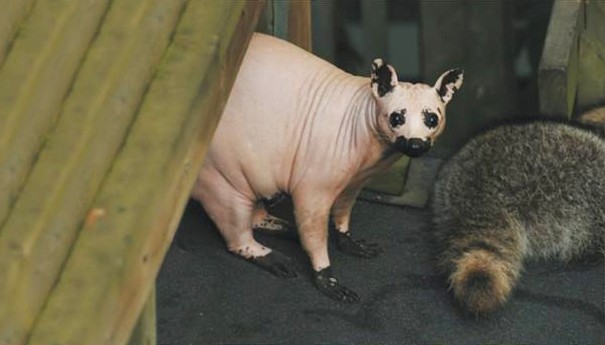 A hairless raccoon, much like the hairless bear that became hairless due to a disease, is plagued by a parasitic infection that left it without fur. Hairless raccoons can also be found in the wild, as parasites live amongst them in their habitats. Although it is without any fur, it still sports that distinctive black ring around its eyes. Without them, you may think it is another hairless animal altogether when you see one in the wild. 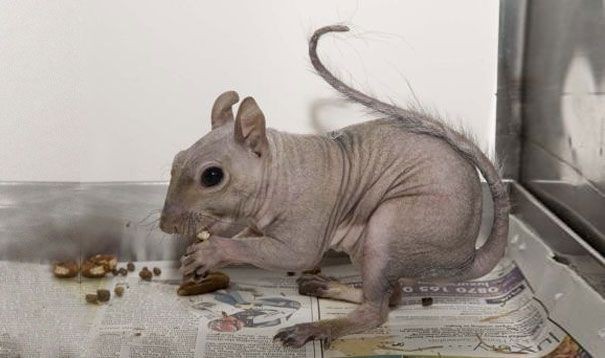 Just like the raccoon, a squirrel may go bald because of mites infesting their bodies. If you see one in your backyard, don’t be freaked out and think that you have seen an alien animal. It’s just a hairless squirrel scouring for a cone in your backyard.

Although the vulture’s body is covered with feather, its head is completely bald. The reason for this is thermoregulation. The featherless head aids in the animal’s regulation of its body temperature. It will also make digging their head in animal carcasses a lot messier if its head is covered in feathers. 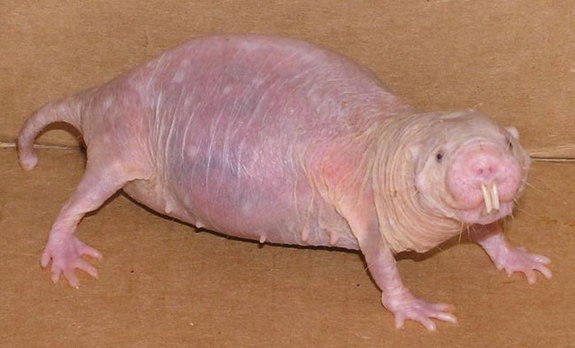 This is probably one of the most eerie-looking hairless animals. Their small bodies and pink, wrinkled skin is enough to make your hair crawl (pun intended). They burrow under the ground and do not have pain receptors, meaning they do not feel any kind of pain. Makes you wanna wish that you’re a naked mole rat, huh? 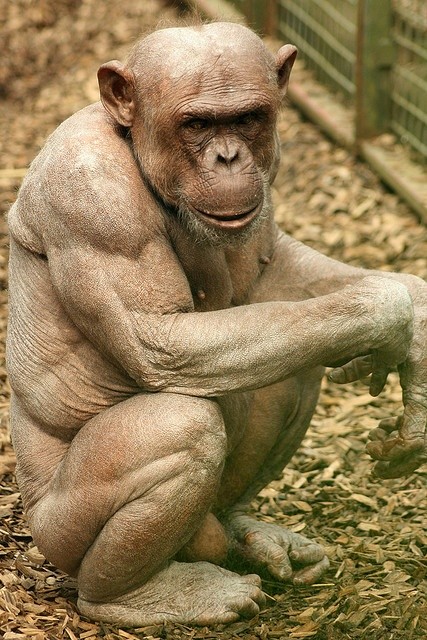 Hairless chimpanzees can suffer alopecia, a hair condition that makes hair fall off the head, or on the whole body. Just like humans, chimpanzees and other apes can go bald with alopecia too. See how closely related we really are with apes? 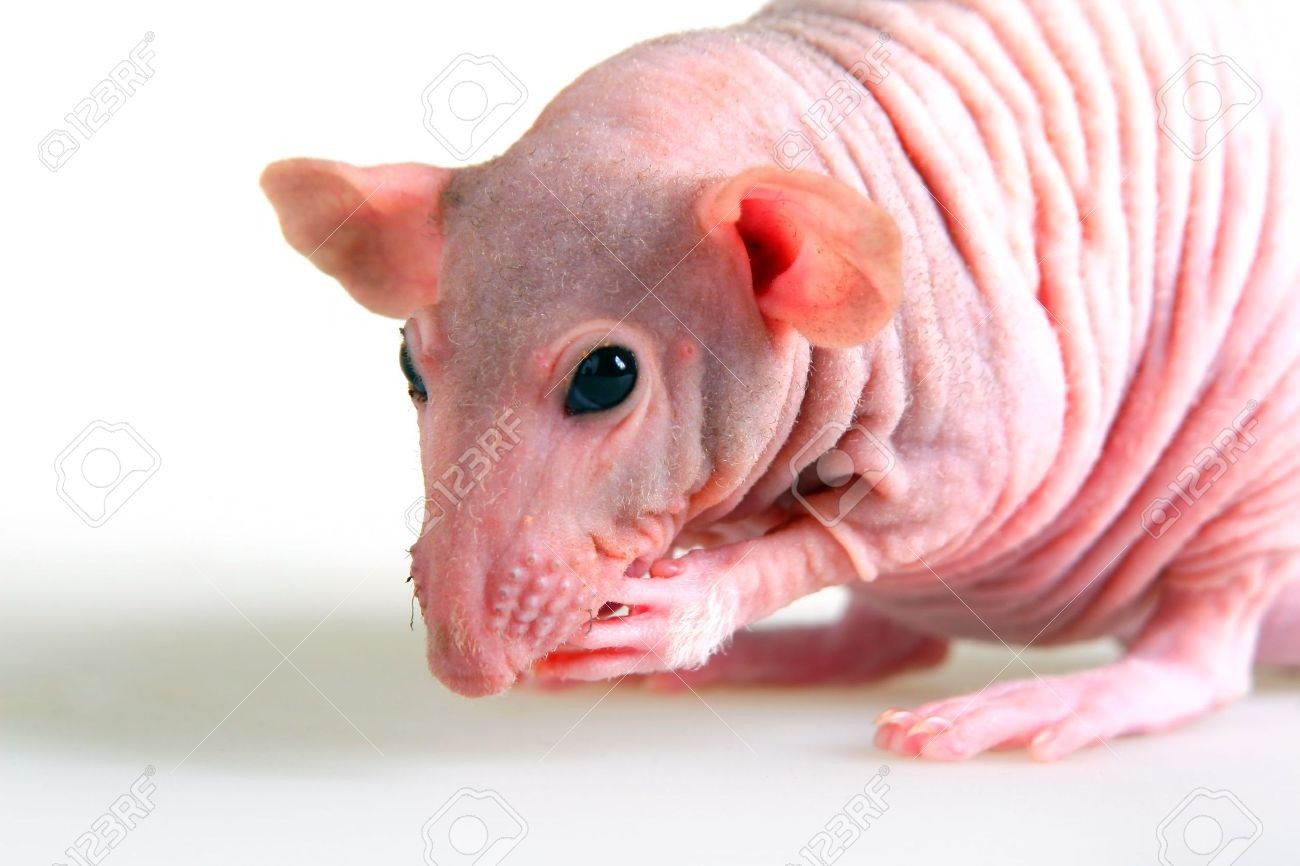 Rats in general are so creepy and disgusting, what with their really dark fur and very long tails. But the hairless rat? Doubly creepy! The wrinkled and pink skin and tail not to mention its blood red eyes are enough to make you run for cover when you see one. But the hairless rat is not naturally occurring. It is a genetically modified creature that scientists bred for studies. 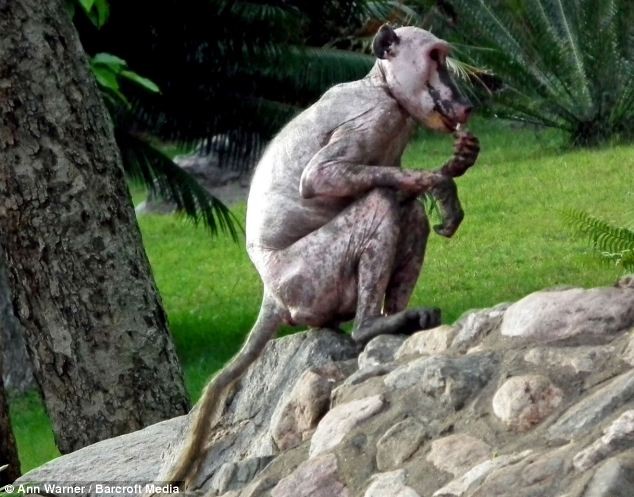 Another primate that’s a victim of alopecia, a hairless baboon was seen in the countryside in Zimbabwe. The cause of alopecia in baboons is still unknown. A hairless baboon looks like it was scalded with really hot water and all the hair came off. 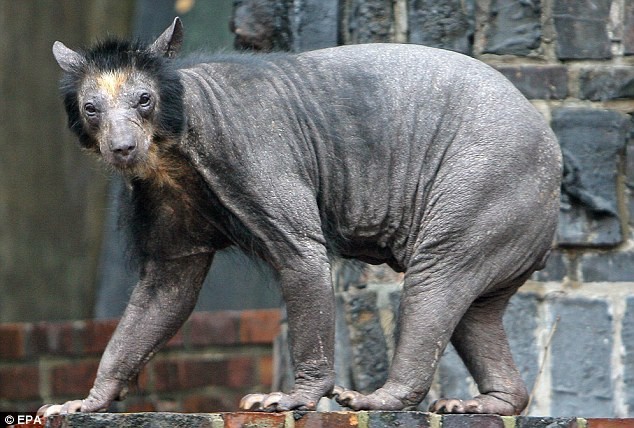 It may seem that a hairless bear is not natural occurring in the wild. Workers in a zoo in Leipzig, Germany were shocked to see that the bears in captivity started losing their fur. The female bears were the ones affected by what seemed like a genetic issue. The hairless bears look like giant mangy dogs. 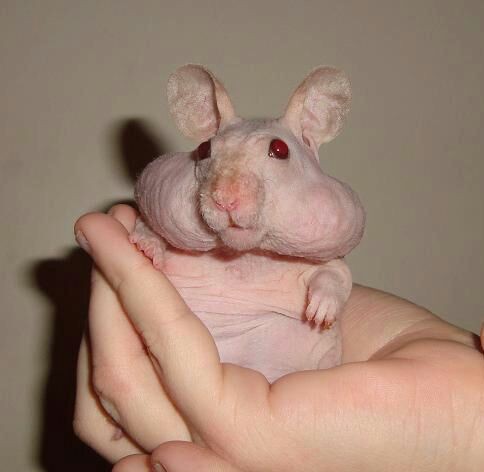 The kind of hamster that has no hair is the Syrian hairless hamster. It is hairless because of a genetic disorder. Imagine your pet hamster running around in circles in its wheel in the cage without an ounce of hair! Not a very pretty sight, eh?

It’s not what you think. A skinny pig is not actually a “skinny pig”. It is a breed of guinea pig that has no hair. Their main purpose for being bred was for lab research, but since then they have become adorable pets as well. Their skin is like ours, which can be a little creepy, if you ask me. 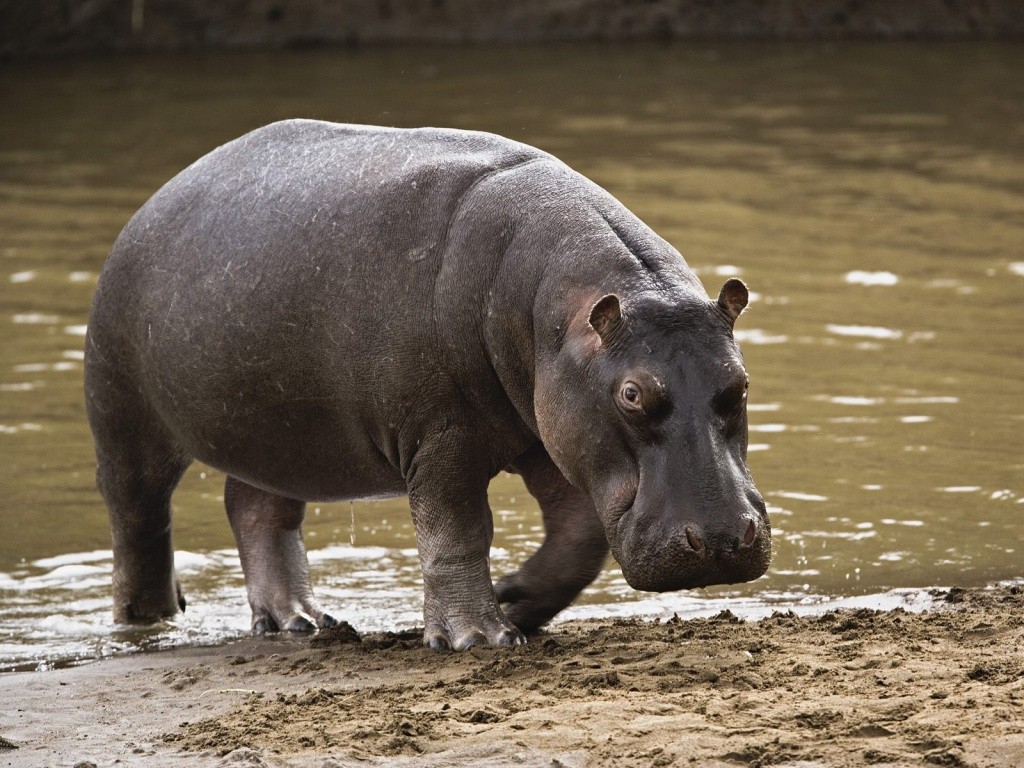 The hippopotamus is a semi-aquatic animal, and a large one at that. Since they spend half the time submerged in water, they do not need hair to keep it warm. Its fat is enough to keep the cold at bay, plus its skin is very thick, so having hair may seem useless. Mother Nature is such a genius, eh? 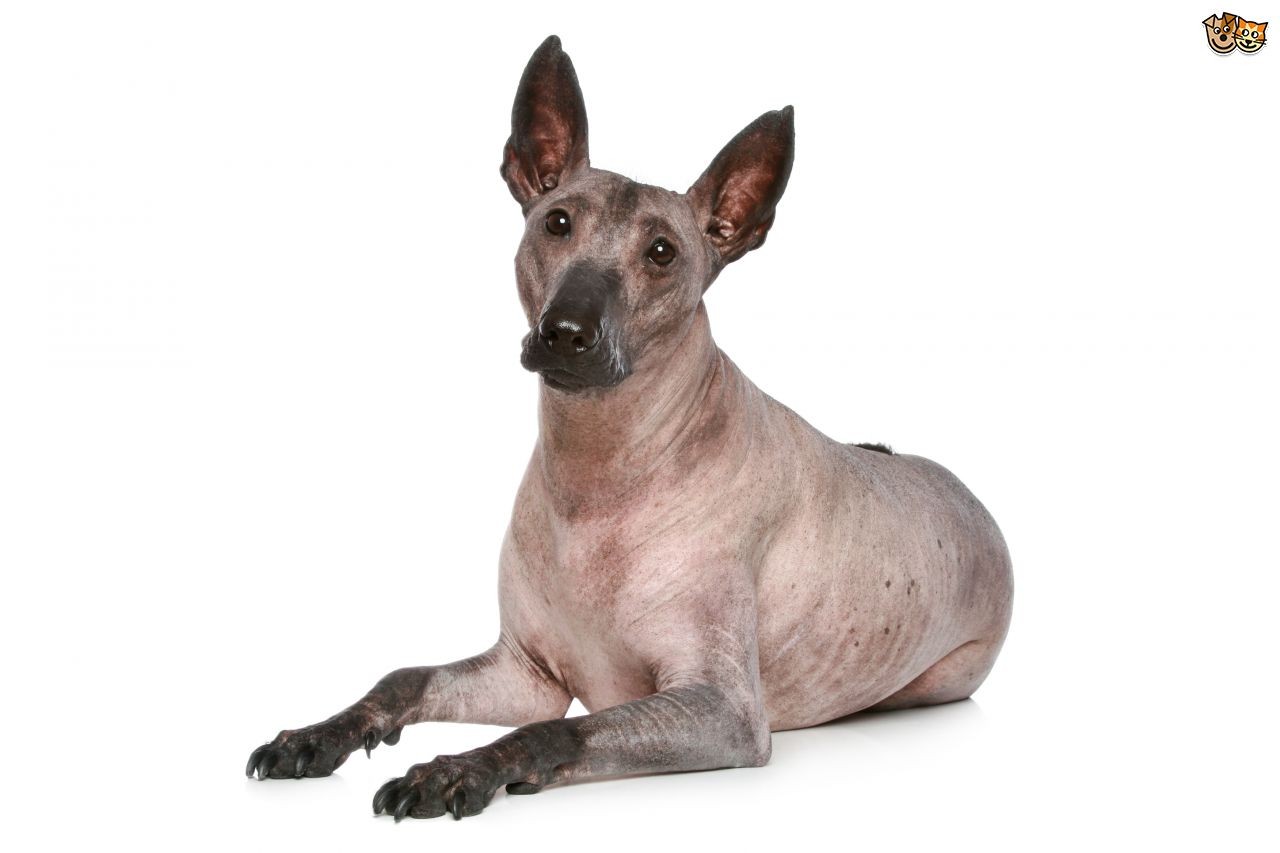 The Peruvian hairless dog, the Chinese crested dog and the Mexican hairless dog are the three dog breeds that are not covered in fur like their cousins. Their type is perfect for those who want to own dogs but are allergic to their fur. Imagine not having dog hair to sweep off the floor and furniture, but still get the same loyalty and vigor of a furry dog. 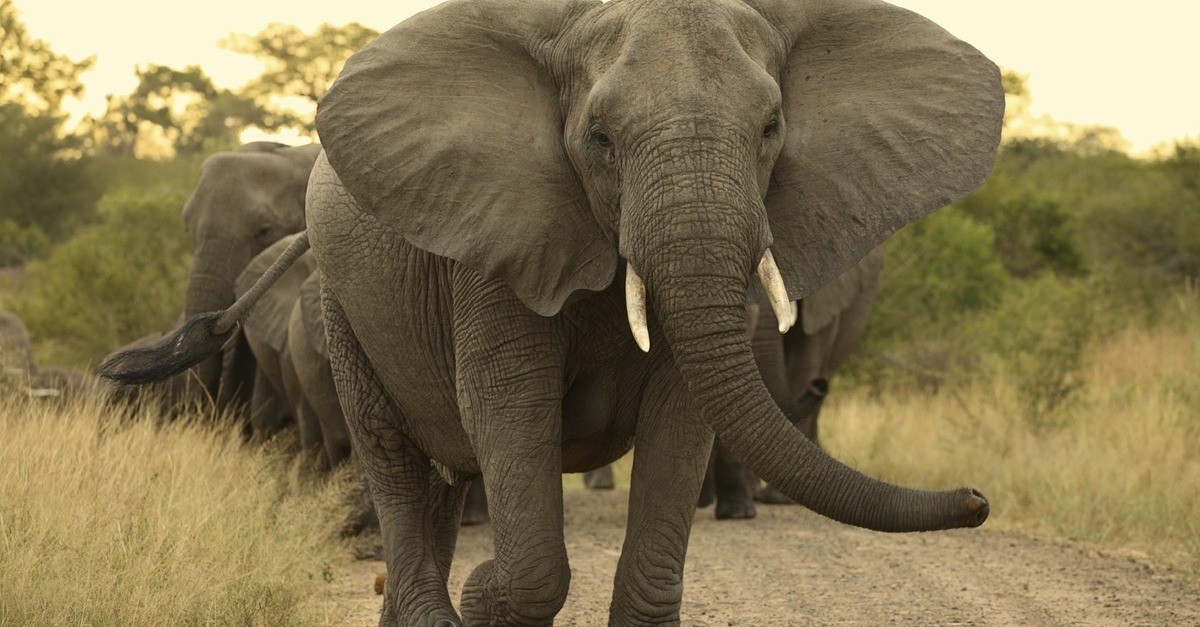 Elephants are generally hairless. Their thick skin is enough to insulate their body, so hair seems useless to them. And since they primarily live in hot places such as in Asia and Africa, it is more important to them to release their body heat rather than keep it. As elephants grow bigger, what very little hair they have on their bodies vanish altogether.

The hairless bear is just one of many hairless animals that you can see in the wild or in captivity. They may be naturally occurring or the work of enthusiastic scientists, they are a sight to behold, even if they may seem eerie and creepy at first.